Amanda Knox has arrived home in the United States.

After a dramatic four-year ordeal, Amanda Knox is back home in the United States tonight. 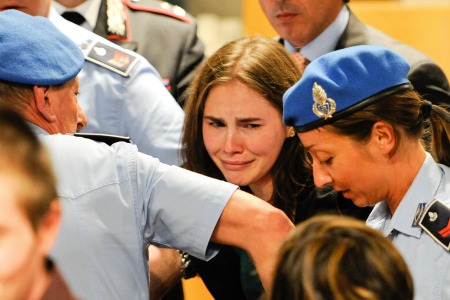 Knox landed at the Seattle-Tacoma International Airport on a British Airways flight at around 5:12 PM PST, and immediately addressed the media that had gathered to greet her.

“I’m really overwhelmed right now,” said Knox in a shaking, teary voice. “I was looking down from the airplane, and it seemed like everything wasn’t real.”

“What’s important for me to say is thank you, to everyone who has believed in me, who has defended me, who has supported my family,” she continued emotionally. Being with her family, she said, is “the most important thing to me right now.”

“Thank you for being there for me,” she finished.

The American steadfastly denied killing Kercher and said her so-called confession was coerced after police beat her and interviewed her in Italian, a language she had only been studying for two months.

Knox’s mother and stepfather also spoke, thanking the family’s supporters and the Italian attorneys who helped secure her release.

“Meredith was Amanda’s friend,” Simon said as Knox nodded and fought back tears.

Amanda Knox’s conviction was overturned in the murder of Meredith Kercher after a court found the original verdict was based on insufficient and tainted evidence.

Meanwhile Kercher’s family is left wondering what truly happened to their daughter.

“We are left looking at this again, and how a decision that was so certain two years ago has now been so emphatically overturned,” said the victim’s brother Lyle.