Rolling in the Deep singer Adele was forced to cancel her 10-date U.S. tour Tuesday, thanks to continuing problems with her voice. 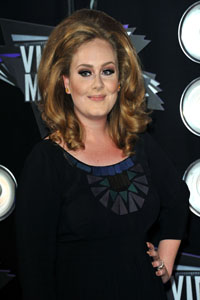 Sad news, Adele fans: the soulful singer officially canceled her 10-day U.S. tour scheduled for later this month, thanks to a hemorrhaged vocal cord. The tour — set to start Fri., Oct. 7th in Atlantic City and continue through Oct. 21 in Grand Prairie, Texas — is the second time she’s had to cancel North American tour dates this year.

“Guys, im [sic] heartbroken and worried to tell you that yet again im experiencing problems with my voice. its ridiculous i know! i cant believe it myself. i follow all the advice im given and stick to regimes, rules and practices to the best of my ability but it seems to simply not be enough,” the Someone Like You singer wrote on her website.

She went on to reveal that her vocal problems started with a flu bout in January. Her hectic promotional schedule didn’t give her enough time to recover.

However, SheKnows caught Adele when she performed in August at the Hollywood Palladium in Los Angeles. During the show, the British vocalist told the audience that her doctor ordered her not to smoke while on tour. Many blamed her first tour cancellation on her chain smoking, so it’s possible she still hasn’t kicked the habit.

“[S]inging is literally my life, its my hobbie [sic], my love, my freedom and now my job. I have absolutely no choice but to recuperate properly and fully, or i risk damaging my voice forever. i have great confidence in believing you know how much this upsets me, how seriously i take it and how truly devastated and annoyed i am by this,” she continued.

Ticket refunds are available for all shows at the point of purchase, according to her label, Columbia Records. However, she promised to make it up to all of her fans.

“[I] will be back and im gonna smash the ball out the park once im touring again. i apologise from the bottom of my heart, sincerely i do.”