Nic Cage’s ex Christina Fulton is releasing an album and girlfriend is not holding back about how much she hates her baby daddy. Her first single, “Thank You,” dropped during an episode of MTV’s Jersey Shore and the dance track is one angry tirade. Listen to it here.

Whether or not Nicholas Cage abused his wife Alice this summer or is a Civil War vampire remains to be proven, but one thing is for sure: His ex Christian Fulton has a bone to pick. With their son Weston all grown up and getting into his own brand of trouble, Fulton is telling Nic to “go thank yourself” — and you can believe she’s got other words in mind when she croons those lyrics on her aptly titled upcoming album, Uncaged. 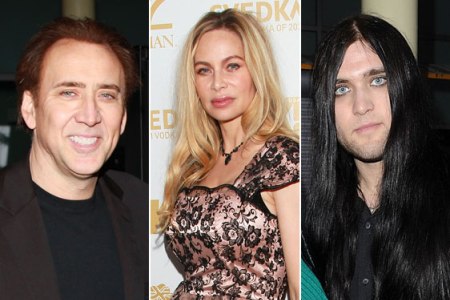 Cage and Fulton first hooked up back in 1988 and had son Weston in 1990. Unlike lucky Patricia Arquette, Lisa Marie Presley and Alice Kim, however, Fulton never got Cage to put a ring on it and in 2009, she sued him for $13 million. She claimed she’d sacrifed her acting and music career to raise their son and the case was settled earlier this year for an undisclosed amount.

Apparently, the settlement didn’t settle the tension, however, as Fulton is now lashing out at Cage through her music. Her new album title, Uncaged, is clearly a reference to her liberation from Papa Cage, hinting that there could be more tirades ahead.

In the meantime, her single “Thank You” leaves no one wondering how Fulton feels about her the man who plagued her with his “bad behavior,” “jealous rage” and “twisted ways.” Just about all the lyrics to “Thank You” are inflammatory, but here are few choice words from Fulton:

You stood there and you lied right through your teeth
You gave me your word you promised everything
You took a sweet thing with good intentions, tried to knock me off my feet

Suffocate, debilitate, suck the life out of me

You dragged me into your sick little games
I was kicking and screaming, it was all for your fame
…
You’re not the guy that I fell for, you’re the monster I left
Such a snake, my worst mistake, yea, all you made was a mess
I learned to hate what you stand for, can’t believe I was blind
But you’ll get yours and I’ll be fine, honey, all in good time

Uncaged is scheduled for release in January 2012, with a new single expected in November.

Listen to Thank You

Want to hear what fury sounds like? Listen to Fulton’s odd pairing of dance beats and hard hitting lyrics.