Hank Williams, Jr. has issued a new statement about his remarks comparing President Obama to Hitler. 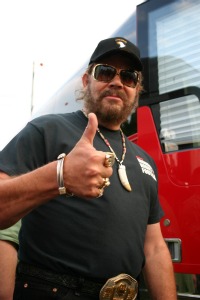 Hank Williams Jr. has issued a follow-up apology for his comments comparing President Obama to Hitler — but while he’s sorry for offending people, he doesn’t exactly say he didn’t mean what he said or sees the error of his ways.

“I have always been very passionate about politics and sports and this time it got the best or worst of me,” Hank wrote on his website.

“The thought of the leaders of both parties jukin [sic] and high fiven [sic] on a golf course, while so many families are struggling to get by simply made me boil over and make a dumb statement.”

He added, “I am very sorry if it offended anyone. I would like to thank all my supporters. This was not written by some publicist.”

Williams’ original comments came during an interview with Fox News when he compared President Obama playing golf with Speaker of the House John Boehner to “Hitler playing golf with Netanyahu” — a stance he stuck to even when given every opportunity by his interviews to rephrase his thoughts.

ESPN quickly yanked Williams’ song All My Rowdy Friends from its usual place in the Monday Night Football broadcast, where it had been the theme song since 1991.

This is the second comment in two days Williams has issued on the matter. Yesterday Williams admitted his analogy was “extreme” but apt and that nobody cares how badly the “working class people are hurting.”

ESPN has not yet announced whether or not they will bring back Williams’ song next week.