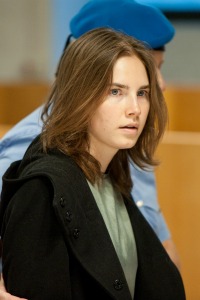 Freed U.S. student Amanda Knox is on a plane headed for her home in Seattle — what will she see there?

Initially, a media frenzy at the Seattle-Tacoma International Airport.

“Wow. Quite a media circus here at Seattle Airport,” tweeted Guy Adam of the U.K.’s Independent newspaper. “Amanda Knox will not be under-whelmed.”

The 24-year old Knox is expected to issue a brief statement thanking her supporters when she arrives at approximately 5 p.m. local time, according to a Reuters report. After that, she’s looking forward to settling back into her old life of backyard barbecues, lying on the grass, playing soccer and seeing old friends.

Upon her arrival, Knox will be doing “just normal things that you would want to do after being in prison for four years for a crime you didn’t do,” said Anne Bremner, a Seattle layer and spokesperson for Knox.

However, life will not immediately go back to normal for Knox, not after the amount of publicity the case has received. Knox will have many offers and opportunities to tell her side of the story if she so chooses, be it through book deals or media interviews. A Seattle radio station has already offered her a job at WQMV radio for one week.

“We believed in you all along, so much so, that we would like to extend an offer of $10,000 to you to come host our morning show for one week,” read a statement on the station’s website. “We would all love to hear what you have to say and maybe help a little with the legal bills.”

Yep, Knox is a hot public figure at the moment and she’s going to be discussed.

“Amanda Knox was freed after four years in jail! But Fashion Police wants her sent back for wearing a hoodie to hear the verdict,” tweeted Joan Rivers as Knox was in the air on her way home.

Just as Knox is getting home, Lifetime will rebroadcast their movie Amanda Knox: Murder on Trial in Italy, which is based on the case. Elements of the film, starring Hayden Panettiere, will be changed to reflect Knox’s legal status, according to a report in the Los Angeles Times.