Ringer meets a whole new kind of bitch this week! No, seriously, that’s the title of the episode!

Will Malcolm stay sober? What will Gemma do now that Bridget has blabbed the truth in a desperate move to save her neck from the exposed affair? And what’s up with that guy from Young and the Restless who’s on deck this week? All your questions will be answered — okay, we can’t guarantee that, but it’s fun thinking we can! 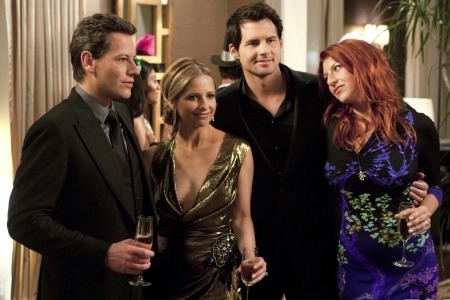 Sarah Michelle Gellar reveals her thoughts on her daughter>>

The CW officially describes “A Whole New Kind of Bitch” as the following: “Gemma (Tara Summers) asks Bridget (Sarah Michelle Gellar), who is still posing as Siobhan, to do her a favor that could cost Bridget everything. Henry (Kristoffer Polaha) is given some crushing news about his writing career, and Andrew (Ioan Gruffudd) has to deal with his tumultuous relationship with his teenage daughter Juliet (Zoey Deutch). Bridget meets a potential new sponsor named Charlie (guest star Billy Miller) at a local Narcotics Anonymous meeting, while Malcolm (Mike Colter) must face his demons when he is put in a position that could jeopardize his sobriety.”

Head over to our comments section and talk about Ringer. We want to know what you think about the CW’s new show.