Pink is headed to the big-screen! Keeping her company in the working-mom category will be another famous name: Gwyneth Paltrow. 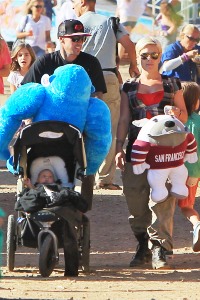 Pink and Gwyneth Paltrow are teaming up to make Thanks for Sharing. The pair of celebrity moms are set to get in touch with their naughty sides in what is described as a “sex-addiction comedy.”

“[Pink] could not be a more ideal fit for this role,” says the film’s screenwriter Stuart Blumberg. “She carries with her just the right combination of heart and edginess for the part of Dede, and we’re incredibly excited to share her acting talent with audiences.”

Entertainment Weekly reports the Raise Your Glass singer will be accompanied by actors Mark Ruffalo, Tim Robbins and Josh Gad of Book of Mormon fame. An added bonus — Edward Norton is onboard as a producer on the film!

Thanks for Sharing, due out in 2012, has already begun filming. Pink was spotted on-set Monday sporting a leather jacket and short cropped hair dotted with blue highlights. The 32-year-old is set to play a “free-spirited” addict who bonds with Gad’s character.

Pink, pictured here with husband Carey Hart, daughter Willow Sage Hart and an armload of toys from the Chilli Cook Off in Cross Creek Malibu in early September, is prone to tweeting the sweetest things about her baby girl. Recent entries include:

Best of luck to Pink on the new movie!