Rachel Uchitel went to the chapel in Vegas… and wound up married. Find out who she married and whether or not she wants children. 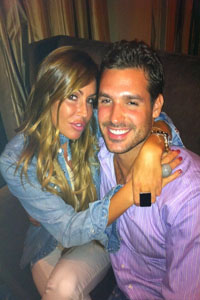 From Tiger Woods mistress to blushing bride. The past two years have been quite a whirlwind for former club promoter Rachel Uchitel. The notorious mistress of the professional golfer married boyfriend Matt Hahn over the weekend in Las Vegas.

Hahn, a Penn State graduate, works in business in San Francisco. Uchitel moved to California from New York a few months ago to live with him. The pair married at the Little White Chapel in Las Vegas– the same place where Bruce Willis married Demi Moore and Britney Spears started her 55-hour-long marriage to Jason Alexander.

The pair showed up around 11 p.m. Sunday night with 12 friends in tow. Uchitel — dressed in a flowy orange gown — danced to Single Ladies before the ceremony started – and finalized the ceremony with Katy Perry’s Waking Up in Vegas. The pair didn’t party, according to TMZ. Instead, they went back to Hahn’s grandparents house.

Uchitel was married briefly in 2004. She was also engaged to be married when the Sept. 11, 2001, terrorist attacks claimed the life of her fiancé, James Andrew McGrady.

The former other woman recently stirred controversy when she said that she was happy her fiancé died in 9/11. “I believe Andy was meant to die because he was too good,” she told Page Six Magazine in early September. “I’m almost happy it ended the way it did because I’ve learned so many lessons from him. It would have been tragic if we got into fights and then divorced.”

She went on to explain where she’d be today if McGrady had lived. “I would be a fat housewife with three kids in Sands Point, Long Island.”

Now, she’s looking forward to having children with Hahn.

“I never wanted them … but I know how much I love my dogs, and I think I’d make a good mother to my own kids.”

Do you think Rachel Uchitel has her life on track now?

Read on for more Rachel Uchitel