Diddy went off on a rant after a clubgoer in Atlanta was spotted by the hip hop mogul drinking Grey Goose vodka, instead of Ciroc, the vodka that he endorses. Today, he apologizes saying he has “backslid and regressed.” 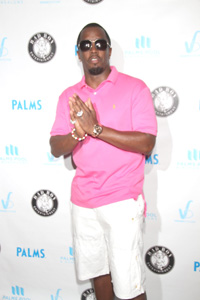 The situation got heated at the Atlanta club Compound, when Diddy was hosting the BET Hip Hop Awards afterparty with T.I. and radio personality Kenny Burns.

Diddy was on stage getting the crowd hyped up when he spotted someone drinking his rival vodka Grey Goose, instead of his endorsed Ciroc. He reportedly started yelling at the patron, calling him the n-word and telling him to “Put that (expletive down),” as he threw a piece of ice at him.

T.I., who was just released from prison (and probably trying to stay out of trouble) took the microphone and said he “tried to defuse the situation” by saying people should be allowed to drink what they want to drink.

The man at the receiving end of Diddy’s rant, Ricky Parker, told TMZ that he felt “humiliated and disrespected.”

“You won’t ever hear me support him from this moment forward,” he says.

Diddy has had a chance to calm down, think about what happened and took to Twitter to apologize for his actions, writing:

“I’m a child [of] God and I should be better no matter what somone says to me. I’m sorry for the ignorant way I repesented myself and us. To all my childen of God … I have backslid and regressed. Forgive me for my ignorance. Pray for me pls. I know better and I am better. I have a responibility that I promise I will live up to. And I’m more dissappointed in myself than you know. I will humble myself and learn. bottom line is I’m sorry to all! Pls find it in your heart to accept my apology. I will do better and be Greater And a source of positivity! Thank yall for listening. Thank you. Real talk. Peace. And yes this has been a 3am emotional real twitter rant! But its my real feelings. And yes #It hurts when I Breathe!!!”

16 mins ago
by Caroline Greelish