Kate Winslet talks to UK Vogue about her “complicated” life in the wake of her split from ex-husband Sam Mendes. 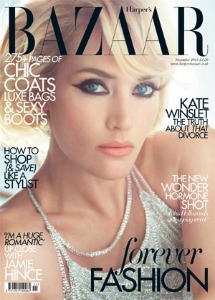 Kate Winslet has it all — beautiful kids, an award-winning career, a gorgeous face — but she says her life is just as complicated as everyone else’s.

Winslet sat down with Harper’s Bazaar UK and while she still refuses to discuss the details of her split with Sam Mendes, she says she wouldn’t trade her “complicated” life for anything.

“One thing I will say about me and Sam is that it’s fine, it’s really fine,” the Contagion actress told the magazine. “I’m not going to [expletive]-fling, there’s no point in even going there. It is what it is… We’re grown-ups at the end of the day, and however hard it’s been for me, it’s been equally hard for him. And we have a child together who we both love — and raising him together, jointly and without any conflict, is absolutely key. It’s the only way to do it, and I’ve really learnt that with Mia.”

Of course, her family isn’t all that different from many families around the world.

“Those days of every child having a mummy and daddy who lived at home — Daddy went to work, and Mummy stayed at home and took care of everyone — those days have almost gone, and it’s so much more unconventional now,” Winslet said.

All of these life changes are just the start of a new part of her life for the actress, though. “I feel that I’m just at the beginning of a new narrative, and it’s incredibly exciting,” she said.

“It’s complicated, I know, and uncertain — but it’s where life happens, between the cracks. It can be a painful process, but I truly hope that never stops for me.”