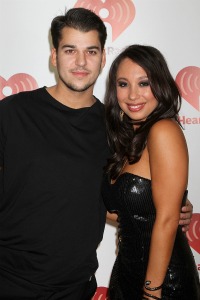 It’s a fact: Go on Dancing with the Stars and you’ll drop some major pounds. Just ask Kirstie Alley, Nancy Grace and Ricki Lake! The latest to slim down from his rehearsal workouts is Rob Kardashian — and his partner Cheryl Burke is spilling the details.

In a column for People magazine, Cheryl Burke says, “It’s just nice to hear positive feedback, especially for Rob. He does have his insecurities and he does have low self-confidence. I think it really pushed him to do even better this week.”

“He’s lost a lot of weight,” Burke wrote in the piece. “His whole physical appearance has changed. He’s using different muscles. He’s super sore all the time. I’m not sure if he’s changing his diet, but the cardio is really good. I think he lost most of the weight just rehearsing from the jive because it’s so fast-paced.”

“I can tell Rob is getting more comfortable with his body because he’s starting to wear tank tops to rehearsals. And you’ll see his arms out. In the beginning, you’d never see that. He looks at himself in the mirror. It’s really cute.”

Rob must be doing something right. On last night’s Dancing with the Stars, judge Len Goodman told him, “You put the ‘dash’ into Kardashian!” earning the pair a score of 24/30.

read on for more cheryl burke

Maksim Chmerkovskiy and Cheryl Burke spotted making out in Vegas