Johnny Depp is on the cover of the latest issue of Vanity Fair and is opening up about the “stupid money” he is making as an actor. We have to ask — does he have a point? 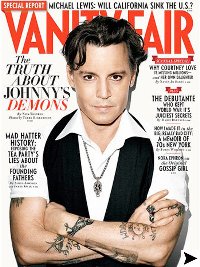 Johnny Depp made a ridiculous amount of money off the Pirates of the Caribbean franchise. That’s a personal opinion held by the actor, expressed in the November issue of Vanity Fair.

“Basically, if they’re going to pay me the stupid money right now, I’m going to take it,” Johnny Depp tells Vanity Fair. “I have to.”

Though he’s not willing to talk specifics, it is reported the 48-year-old’s total take from the Pirates phenomenon is in the $300 million range. The huge sum due in part to a gross-profit sharing deal brokered with Disney.

Before you’re tempted to label Johnny Depp’s willingness to accept such obscene amounts of cash, he clarifies that it isn’t himself he has in mind. “I mean, it’s not for me,” the actor says of the money. “Do you know what I mean? At this point, it’s for my kids. It’s ridiculous, yeah, yeah. But ultimately is it for me? No. No. It’s for the kids.”

Those kids are, of course, 12-year-old daughter Lily-Rose and 9-year-old son Jack with long-time partner Vanessa Paradis. Though the model was spotted wearing what looked to be an engagement ring earlier this year wedding bells have yet to chime for the couple.

Though Johnny Depp is rolling in the dough these days he admits to being willing to do just about anything for a buck when he’s hard up. Long ago the actor regularly attended Scientology study groups because those who attended were paid $3 per meeting. “I went to a bunch, man,” the Rum Diary star says. “It was great. It was so fantastic.”

For more with the man who has come such a long way, head on over to Vanity Fair!

Do you agree with Johnny Depp that actors make “stupid” amounts of money?