Brad Paisley, Kimberly Williams Paisley and the Sesame Street Muppets are taking on hunger and poverty, with the help of new Muppet pal Lily. The new 7-year-old “food insecure” puppet will premiere in Growing Hope Against Hunger, a one-hour primetime special that aims to help children and families cope with hunger. SheKnows has a sneak peak. 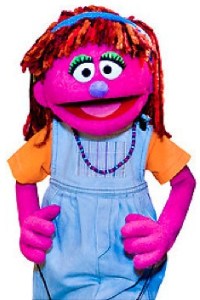 With the problem of childhood hunger and poverty in America growing by the day, Brad and Kimberly Paisley, Elmo, Rosita and Grover have teamed up with Sesame Workshop and Wal-Mart for an emergency Muppet response. With the help of a new Muppet Lily, who represents the 17 million children for whom access to food is uncertain, they’ll raise awareness and support these kids in a special premiering Sunday.

“Food insecurity is a growing and difficult issue for adults to discuss, much less children,” said the Paisleys. “We are honored that Sesame Street, with its long history of tackling difficult issues with sensitivity, caring and warmth asked us to be a part of this important project. We hope that it will not only provide families with the tools they need to help them cope and live the healthiest life possible, but will educate the general population about the extent of food insecurity and hunger in the United States.”

In addition to meeting Lily, who has been created to reflect real children who grow up surrounded by uncertainty, viewers will learn strategies of empowerment and meet amazing real-life children and families who have found or created strategies for conquering this struggle.

The primetime special is just one part of the Food for Thought campaign funded by a Wal-mart grant. You can find more information about childhood hunger and tools on Sesame Street‘s Food for Thought page.

Justin Bieber gets his own Sesame Street puppet