It pays to be a Gossip Girl. Blonde bombshell Blake Lively is reportedly rebounding from her split with Leonardo DiCaprio with another leading man: Ryan Reynolds!

Goodbye Leo, hello Ryan? That’s the story some insiders are telling after the news broke that Blake Lively and Leonardo DiCaprio called it quits after several months of dating. 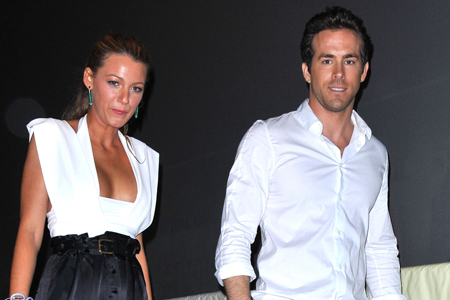 The Boston Herald reported that the Green Lantern co-stars were spotted in town over the weekend. The hunky Reynolds is in town filming R.I.P.D.

“Over the weekend, the two were spotted at sushi palace O Ya in the Leather District, and the next afternoon while Ryan was shooting R.I.P.D. in the Financial District, Blake dropped $270 on groceries at Five Seventy Market in the South End,” the newspaper wrote.

“According to our spies, either Reynolds recruited Blake to fill his fridge or she plans to stay for a while! “She bought general groceries, mostly healthy stuff,” a store source told the Track. “And a couple of pumpkins. Some oats and grains, fruits and vegetables, and toothpaste. She bought a lot of stuff.”

The duo was also spotted at the Radiohead concert at the Roseland Ballroom in NYC with Reynold’s ex-wife, Scarlett Johansson, before heading to Beantown.

“Blake was late and almost missed the train,” a passenger told E! News’ Marc Malkin. “The conductor didn’t recognize her at first because she had a hat on.”

We’ve reached out to reps for both Lively and Reynolds to see if the rumors are true.

This isn’t the first time Reynolds and Lively have been rumored as a couple. The co-stars were rumored to be more than friends this summer while promoting their blockbuster film. If the dating rumors are true, it’s likely thanks to Lively’s skills in the kitchen.

“I would cook for the entire crew and I would try to lure him into eating some of the treats,” Lively told US Weekly of Reynolds. “Cupcake lollipops, fresh candies, homemade caramel and marshmallows covered in chocolate — stuff like that.”

“I was trying to sabotage him,” she joked of the fit Reynolds. “I am a horrible person!”

Read on for more Blake Lively