Sherri Shepherd recently went head to head with one of her co-hosts on The View. The actress and comedian got into a heated debate with Barbara Walters regarding her use of the racially charged N-word. 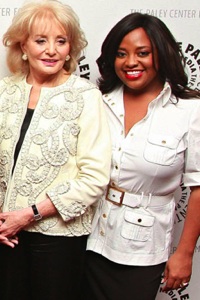 The women of The View are known for their on air spats and vibrant discussions but Monday’s episode got too personal for co-host Sherri Shepherd. The View producer and star Barbara Walters was reprimanded by the comedian for her use of the N-word in a news report.

According to People, Whoopi Goldberg used the word first when discussing a story about presidential candidate Herman Cain. Afterwards, Walters chimed in and repeated the word in context with the topic. Walters said, “It’s very hard for me to say. … The fact that I just said it now gives me chills.”

Shepherd told Goldberg, “When I heard you say it, it was fine. You said it a different way.” But when referring to Walters, “I don’t like it when you use the word. … When you say it, it’s a different connotation.” The show took a short break and when they returned the two women continued their discussion with Goldberg stepping in as peacemaker. Goldberg didn’t take offense to Walter’s use of the word because she felt that she was reporting on it — not calling her the name.

The ladies eventually went into a debate about the various terms that can be deemed offensive to all races and cultures before coming to an understanding.

You can watch the entire discussion below.