After 10 years as a goodwill ambassador for the U.N. Refugee Agency, Angelina Jolie is considering a new position within the organization working with U.N. High Commissioner for Refugees Antonio Guterres. 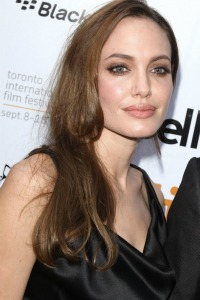 Angelina Jolie is now known more for her work with the United Nations than her acting, and her latest job offer just might take her away from the career that brought her fame, fortune (and Brad Pitt!) once and for all!

According to the Associated Press, Jolie is in talks to take on a new and expanded role within the United Nations, as a special envoy for U.N. High Commissioner for Refugees, Antonio Guterres.

Although nothing is set in stone as of yet, Jolie is considering a few options for her expanded role.

She revealed in a statement, “We are looking at a few countries in the world. We’re hoping to discuss it in the next few weeks, but we want to research it properly and do it well.”

Jolie currently holds the position of goodwill ambassador for the U.N. refugee agency. She has visited dozens of countries during her 10 years with the organization.

Guterres explained during a meeting with the agency’s executive committee that Jolie could serve well as “a strong international suppport” during dire situations.

One of the jobs Jolie may hold is a new role as special envoy for the refugee crisis in Afghanistan where refugees flee their country and head to Pakistan and Iran. Both countries combined are aiding 2.7 million Afghan refugees.

Stated Jolie of her work with refugees from all countries, “They are the most vulnerable people in the world, and they are also the most resilient people in the world. Refugees are survivors, they are mothers and daughters and fathers and sons. They are all extraordinary people who have a remarkable story that tells of strength in the face of great loss. They need our help more than ever.”

Despite her continued work with the United Nations, Jolie continues to be the gold standard to working moms everywhere, putting family first and allowing her children to lead normal lives.