Jessica Simpson fueled pregnancy rumors this past weekend when she was spotted holding a baby at her ready-to-wear clothing collection debut at a San Francisco Macy’s store. 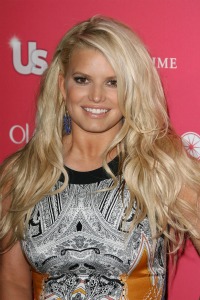 Jessica Simpson continued to fuel pregnancy rumors at an in-store appearance at Macy’s as she held the child of an admirer during a photo op.

Simpson has long been reported to be with child, a fact that she has neither confirmed or denied.

The singer is currently engaged to Eric Johnson, but recently postponed her wedding. According to US Weekly, the reason for the postponement was because Simpson was still undecided as to what type of affair she wanted.

At the event, which was to celebrate her new ready-to-wear line for the celebrated store, Simpson donned a baggy black shirt and oversized jacket.

Rumors began to surface that Simpson was pregnant after photos appeared of the singer in several oversized outfits, fueling reports she was concealing a baby bump.

Simpson has long expressed her own desire to start a family. When she first became engaged to Johnson,  the singer revealed, “I thought I had it figured out. I’m going to be this great pop star, be married, have babies.” She continued in her interview with US Weekly, “But things can be taken from you.”

Last November, Simpson revealed to Access Hollywood, “There are no babies yet. But I definitely see myself having a family with him, so that’s exciting to think about.”

She revealed her true heart to fans at a press conference for iHeartRadio in 2010. She stated during An Evening with Jessica Simpson that, “I hope I don’t die alone, that’s for damn sure. Hopefully I can find a man that understands my life and understands my purpose. I just need to find the right man.”