The contestants on Dancing with the Stars told the story of the most memorable year of their lives through dance this week — and things got emotional! 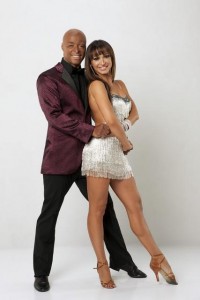 Art imitated life in the contestants’ routines this week, which meant a tissue alert for the viewers.

First, it was Ron Artest, a.k.a. Metta World Peace, then Elisabetta Canalis — no one is safe from elimination on Dancing with the Stars.

Ricki Lake might have took her rumba to the top this week, but it was J.R. Martinez that had us all in tears.

Rob and Cheryl (24/30): This week, Rob Kardashian celebrated his father Robert Kardashian Sr., who passed away in 2003.

Chynna and Tony (26/30): 1990 was the year, Hold On was the song. Chynna Phillips hit rock bottom, but pulled herself together and met her husband Billy Baldwin.

She chose the actual song to dance the rumba to with Tony Dovolani and finally pushed herself to the limits we knew she could. Bruno Tonioli said, “I knew you could do it” and “you belong in a museum.” Not sure what he meant by that, but it’s obviously a good thing. Oh, they got the first nine of the season.

Chaz and Lacey (18/30): We were waiting to see if Chaz Bono would dance to a song by Sonny Bono or Cher and there was no better week to bust it out.

Chaz chose a song Sonny Bono wrote called, Laugh At Me, to dance the rumba to. He said it paid tribute to 2011 because he’s “happier” than he’s ever been and the song basically tells the story of not worrying about what others think. The judges were mixed, with everything from “distraction” to “your best dance,” gracing their lips. Eh, he’s Chaz — he’s interesting.

Kristin and Mark (24/30):  In 2005, Kristin Cavallari moved from Laguna Beach to LA and never looked back. Of course, she paid tribute to the year.

She shook her rump hard with a sexy samba to Beyonce’s Crazy In Love. How she doesn’t have whiplash is a mystery to us. Part of it wasn’t Len’s “cup of tea” and in true Bruno fashion, he went nuts over her wild side. We still can’t tell if the “sexy” got messy at parts or if it was supposed to look like that.

Carson and Anna (23/30): Carson Kressley used his tango to pay tribute to 2003, when his show Queer Eye For The Straight Guy premiered and helped him feel like he finally belonged somewhere.

Anna Trebunskaya choreographed the dance around Carson’s love of style, with a nice push and pull that helped him master the tango. He brought the drama and fun that we knew he could. Len said he put the “boy in flamboyant!” We love Carson!

J.R. and Karina (26/30): J.R. Martinez and Karina Smirnoff paid tribute to the year J.R. was injured when his Humvee hit a land mine and his face and body were burned.

Their rumba was so emotional and filled with so much story that for a minute we forgot it was an actual dance. For J.R. to be doing what he’s doing after such a life changing moment, the dance doesn’t even matter and Carrie Ann’s tears said it all. As she said, he did something “extraordinary.”

Nancy and Tristan (21/30): Nancy Grace almost lost one of her twins, Lucy, in 2007 and she put the emotions to use in her waltz. She got right in there and performed decently, but it was a tad sleepy.

Carrie Ann thought little creatures were going to come out of the forest like in a fairytale, so maybe we confused sleepy with a fairytale.

Side note — how cute was it that Tristan MacManus put a move Lucy does in her mom’s dance?

Ricki and Derek (27/30): 2010 was a tough year for Ricki Lake, but it didn’t stop her and Derek Hough from paying tribute to it with a gorgeous rumba. Did anyone else notice something about her this week? Ricki Lake is literally shrinking before our eyes.

Back to the dance. Carrie Ann Inaba said “Ricki Lake is on fire!’ We’re not sure if that was the best choice of words, considering she was paying tribute to a year that saw her house burn down.

Hope and Maks (24/30): In 2011, Hope Solo made it to the World Cup with the U.S. soccer team but the team didn’t win. She danced the cha cha cha to her team song, Tonight, and you could tell she wasn’t comfortable being sexy. However, she hid it just enough to make it her best dance yet.

She needs to back off of that stomping walk she does.

David and Kym (24/30): David Arquette paid tribute to this past year when his marriage to Courteney Cox fell apart. Considering Courteney and Coco have been there supporting him each week, it was only right.

He danced a rumba with Kym Johnson that took him from being frantic and spastic last week, to controlled and emotional this week. Week one David is back!

What did you think of this week’s emotional Dancing with the Stars?