Hank Williams Jr. ignited a firestorm of controversy Monday when he compared Barack Obama to the man responsible for killing millions of Jewish people.

ESPN pulled the song All My Rowdy Friends by Hank Williams Jr. from their Monday Night Football telecast after the outspoken star compared President Obama to Adolf Hitler during an appearance on Fox News’ Fox and Friends Monday morning. 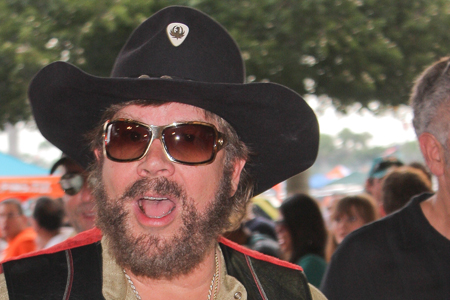 Williams was talking to Fox News hosts Gretchen Carlson, Steven Doocy and Brian Kilmeade via satellite from Nashville when they started talking about politics. The singer then went on to say that the recent golf match between Obama and Speaker of the House John Boehner was “one of the biggest political mistakes ever.”

The Fox News anchors were visibly stunned by the veteran musician’s comments. They asked him again to clarify what he said to be sure he wasn’t misunderstood. “You used the name of one of the most hated people in all the world to describe, I think, the president,” Carlson said.

The comment didn’t go over well with many Americans — Democrat and Republican — and they implored ESPN to pull his song from this week’s telecast.

“While Hank Williams, Jr. is not an ESPN employee, we recognize that he is closely linked to our company through the open to Monday Night Football. We are extremely disappointed with his comments, and as a result we have decided to pull the open from tonight’s telecast,” the network said in a statement. The song has been the Monday Night Football theme since 1991.

No word whether or not they’ll reinstate the song for future broadcasts.

The singer is now trying to explain away his comments.

“Some of us have strong opinions and are often misunderstood. My analogy was extreme — but it was to make a point. I was simply trying to explain how stupid it seemed to me – how ludicrous that pairing was. They’re polar opposites and it made no sense. They don’t see eye-to-eye and never will. I have always respected the office of the President,” he wrote on his Twitter account.

“Every time the media brings up the tea party it’s painted as racist and extremists — but there’s never a backlash — no outrage to those comparisons… Working class people are hurting — and it doesn’t seem like anybody cares. When both sides are high-fiving it on the ninth hole when everybody else is without a job — it makes a whole lot of us angry. Something has to change. The policies have to change.”

Williams is pretty grumpy about politics in general these days. The anchors asked him who he liked for the 2012 GOP presidential nomination.

Do you think ESPN should permanently pull Hank Williams Jr.’s song from their broadcasts?