Nineties singer Stevie B was arrested after a performance in Massachusetts for failing to pay a big chunk of change for child support. 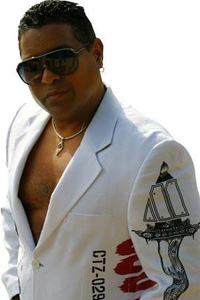 Singer Stevie B, best known for his hit song in the late 1990s “Because I Love You (The Postman Song),” was arrested for unpaid child support totaling $420,000.

The singer was performing on tour at the MassMutual Center in Massachusetts when he was arrested. Some reports say he was pulled off stage and arrested, however his attorney Justin Nadeau said that is not what happened.

“That is 100 percent incorrect; he was not pulled off the stage. He was not yanked off the stage. He had just finished performing and he was exiting the arena and it went very smoothly. There was a couple of people that introduced themselves to him and that’s how it occurred,” his attorney told a Springfield reporter.

The singer will stay in jail until he comes up with a payment of $10,000. Reports say he must also pay $921 a week plus $500 month for child support. 53-year-old Stevie B has two daughters, aged 19 and 20, with a woman from Agawam. She filed for back child support and he was supposed to go to court on April 7th, but failed to show up which resulted in authorities charging him with contempt.

Stevie B was at the Massachusetts area to perform in the Freestyle 2011 — Strictly Rush Tour: Stevie B, Expose and Lisa Lisa.

Find out how much child support Charlie Sheen pays per month >>>