Gwen Stefani is many things — mother, rock and roller, fashion icon and clothing designer. But one thing she isn’t is out of touch with who she is, and that’s why she rocks 42 harder than anyone else! 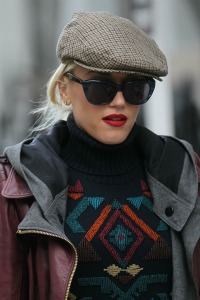 Singer Gwen Stefani turns 42 years old today and still looks as amazing as she did when she first burst out onto the music scene back in the ’90s as the lead singer of the pop/ska band, No Doubt. After ten years of performing in tiny clubs, 1995 was the year of No Doubt and their breakout album, Tragic Kingdom and there was no looking back for the band and their talented and breakout lead singer.

Don’t let the platinum blonde hair fool you! The stylish Stefani is a shrewd businesswoman who is also a clothing designer, (L.A.M.B. since 2004), actor (she portrayed the late Jean Harlow in The Aviator with Leonardo DiCaprio), a fragrance developer and L’Oreal cosmetics spokeswoman.

Along with that, she is mother to two of the coolest kids on the planet, Zuma Nesta Rock and Kingston James MacGregor, and the wife of the world’s hottest English rocker, Gavin Rossdale.

Get a look at Stefani’s line for Target, Harajuku Mini here>>

Stefani is the kind of person you would just love to hate if you could, but her genuine concern for those around her and for her planet puts her on another level of music superstar. The kind you aim to be like.

It wasn’t that long ago that her quirky style and self-designed costumes launched a million Gwenabees, who dressed like, wore their hair like and tried to live like their idol.

In 2009, she reunited with No Doubt for a national tour and since then, has concentrated mostly on raising her children and developing her fragrance, clothing and accessory lines.