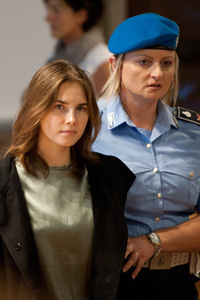 Amanda Knox broke down in tears as the Italian court overturned her murder conviction and said she was free from prison after serving four years in an Italian jail since being accused of murdering her roommate, Meredith Kercher. DNA evidence has cleared her name, while Rudy Guede (whose DNA was found at the scene) is currently serving 17 years for the crime.