The murder conviction of Amanda Knox has been overturned by an Italian court. 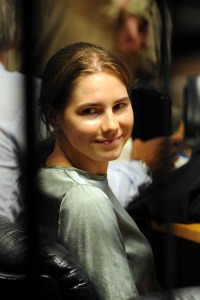 The Amanda Knox verdict is in, and the American will be free after her murder conviction was overturned by an Italian court.

Knox reportedly punched the air and screamed “Yes!” as her parents shed tears of joy when the verdict was read. The parents of murder victim Meredith Kercher looked on in stunned silence.

The verdict means that Amanda Knox can return home to the U.S. after a short return to her Perugian jail to collect her things.

The prosecution can file a final appeal in the case, but Knox does not need to be present for it.

The defense team argued that much of the evidence in the case was tainted by sloppy police work, that cops used unfair and at times brutal tactics while interrogating the college student and that Knox had no motive for the killing.

Click here for more tales of celebrity justice on SheKnows >>>

Another man, Rudy Guede, is serving 16 years for the crime. His was the only definitive DNA found in the crime scene, the defense team claimed.

Knox pleaded her innocence to the court this morning, saying, “Meredith was killed and I have always wanted justice for her. I am not fleeing from the truth and have never fled. I insist on the truth. I insist after four desperate years for our innocence because it is true. It deserves to be recognized.”

“I want to go home. I want to return to my life, I don’t want to be punished and deprived of my life, future for something I have not done because I am innocent, Raffaele is also innocent.”

“We deserve our freedom. We have never done anything not to deserve it.”