Congratulations are in order for Erin Burnett. The familiar face of CNN has launched a new show and announced her engagement! 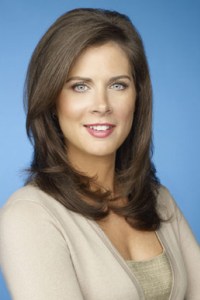 Erin Burnett met her future husband during her time working at Citigroup before moving to cable news network CNBC. She and David Rubulotta reportedly became engaged last month. It is believed no wedding date has yet been set for the couple.

Displaying a sparkling engagement ring on her wedding finger and a radiant smile, Burnett and Rubulotta walked together at the event for OutFront along with CNN co-workers Piers Morgan and Anderson Cooper.

A spokesperson for Erin Burnett confirmed the news of her engagement adding, “She loves how supportive he is.”

The other happy (but nerve-wracking) news in the television anchor’s life is Monday’s premiere of OutFront, an hour-long television news program scheduled to air weeknights on CNN. Yesterday Erin Burnett revealed she’ll be avoiding the ratings numbers, saying:

“Well, I’m not going to be looking at them at first, because I think we have to be — we know what we are, and we have a mission statement and we need to be consistent with that. And I think that’s really important, because I think as people know what that is, and there are consistency issues we care about, that they will come to the show. So the most important thing is to be consistent and to believe in what we’re doing.”

Best wishes on both the premiere of OutFront and upcoming wedding plans to Erin Burnett!