Jenna Fischer has given birth to a baby boy. 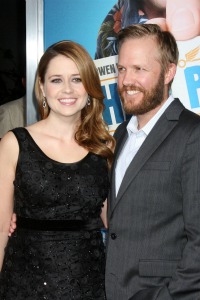 It’s not quite just another day at The Office for one actress. Jenna Fischer has given birth to a baby boy!

The 37-year-old star and her husband, screenwriter Lee Kirk, welcomed their son Weston Lee into the world on September 24, her rep confirmed to People.

Fischer’s pregnancy was written into her role on the hit show The Office, where Pam and Jim are expecting their second child. “Pam and Jim snuck away last season on Valentine’s Day, and they had sex,” Fischer revealed. “The story is that they conceived this baby at that time and were keeping it a secret until we come back from the summer.”

The actress first revealed her pregnancy in May, saying she only had a few pregnancy cravings.

“In the beginning, it was a lot of macaroni and cheese and Lucky Charms. Now it’s a lot of strawberries,” she said. “I’ve been really lucky. I’ve had a really easy pregnancy.”

Fischer later revealed to Jay Leno that she was expecting a boy, saying, “This is the second grandchild, but the first grandson.” She also revealed that she had been saving the news for her Tonight Show appearance, despite being asked the question by reporters.

Jenna Fischer and Lee Kirk got engaged during a European vacation in 2009 and wed in Malibu in July 2010.