Twilight star Kristen Stewart turns up the heat on the latest cover of British GQ. The 21 year old is channeling her inner vixen, while promoting the newest installment of the vampire series, The Twilight Saga: Breaking Dawn – Part I. 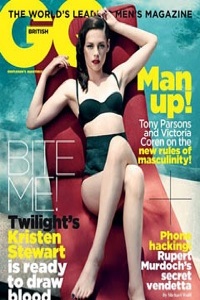 Who says Kristen Stewart can’t be sexy? The actress has been vamping it up for several magazines like W and now British GQ. Stewart is doing her part to promote The Twilight Saga: Breaking Dawn – Part I and she’s showing that both she and Bella are all grown up.

On the cover, Stewart wears a vintage bikini, loose curls and red lipstick, while relaxing on a recliner. The poolside set up is used for the latest issue of British GQ, where the actress opens up about her fashion evolution. She told the magazine, “I looked like a boy for a long time. Now I feel like a woman.”

Ms. Stewart should definitely feel more mature considering her character changes in Breaking Dawn. Bella Swan goes from mousy high school student to a young wife and expectant mother. She has to grow up and grow up fast. Judging from the trailer, Bella has a troubled pregnancy that forces her to put her baby’s life before her own.

On the brighter side, both Kristen Stewart and Robert Pattinson channel From Here to Eternity in the romantic honeymoon scenes featured in the film. The actress wears another retro inspired swimsuit that’s all white with modern details.

Kristen Stewart has definitely grown up. She’s come a long way from playing the little girl in Panic Room and Catch that Kid. She’s her own woman.