After two weeks in the top three, Dolphin Tale swam to first this weekend. Moneyball maintained its hold on second, while The Lion King finally bowed, taking third. Courageous and 50/50 made a showing, but none of the new releases performed that well the first weekend of October.

While last weekend’s box office turned out to be historically lucrative, the weekend of September 30 to October 2 was a quiet one. Dolphin Tale, Moneyball and The Lion King 3D again jockeyed for first, leaving little room for the new contenders. The religious flick Courageous continued to work its grassroots effort, however, turning its presale win into a fight with 50/50 for fourth. Dream House and What’s Your Number? bombed, while The Smurfs continue to dominate the world. 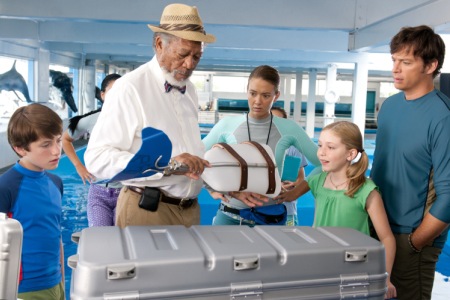 Morgan Freeman and Harry Connick Jr.‘s Dolphin Tale took home the gold this weekend, with a quiet $14.2 million that pushed its 10-day to $37.5 million. Brad Pitt and Jonah Hill‘s Moneyball followed with another 12.5 million, pushing its 10-day to a slightly higher $38.5 million.

The Lion King 3D took a hit, but still managed to roar past some records in its third week of release. The $11.1 million weekend pushed The Lion King‘s total to $408.2 million since its birth, 17 years ago. That tops Spider-Man and puts the King into the top ten domestic releases of all time. The Lion King got an extra week out of its intended two week run and may still climb higher in that top 10, but it also comes home on Blu-ray on Tuesday.

With the King’s help, Walt Disney Pictures surpassed the $1 billion mark this weekend. That’s the sixth year the mouse has managed to pull that off, but still doesn’t compete with Warner Bros and Paramount both hitting the $2 million mark over the summer.

Joseph Gordon-Levitt and Seth Rogen‘s 50/50 opened in fourth place, banking $9.8 million with their cancer tale. Some critics are blaming the advertising and dark subject matter for the weak opening, which means word of mouth may help the numbers this week.

As anticipated, Sherwood Pictures’ Courageous rode its grassroots campaign for a big opening. The Christian film about four men struggling to step up as fathers made the top five, coming in just ahead of 50/50 while only showing in 1,161 theaters. For a bit of perspective, Dolphin Tale was showing in 3,515 theaters, many of those with a 3D price hike; while 50/50 was playing in 2,458.

Sherwood’s newest film stands proud as the fifth highest religious film opening, behind Mel Gibson‘s The Passion of the Christ and the Narnia movies. Courageous hopes to lure out more church goers and also grab the mainstream market to surpass Sherwood’s Fireproof, which was made with half the budget, opened with $6.8 million and closed with a total take of $33.46 million in 2008.

Daniel Craig, Rachel Weisz and Naomi Watts‘ Dream House closed the weekend at sixth, with an unimpressive $8.2 million. Taylor Lautner‘s Abduction couldn’t manage to steal itself into the top five over its second weekend in theaters, but did manage to beat newcomer What’s Your Number?. The Anna Faris –Chris Evans rom-com came in eighth with $5.6 million. Contagion dropped to ninth with $5.0 million and Killer Elite closed out the top 10 with $4.9 million.

Meanwhile, The Smurfs are pretty much over in The U.S., but the little blue guys ruled the overseas box office for the eighth weekend in a row. That puts the revamp’s international total at $380.8 million, with a worldwide total of $519.3 million. Wonder when The Smurfs 2 will land?

Next week’s hot new contenders are Ryan Gosling and George Clooney‘s The Ides of March and Hugh Jackman‘s Real Steel. Limited releases include 1911, Blackthorn, Dirty Girl, The Heir Apparent: Largo Winch, The Human Centipede 2 (Full Sequence), Incendiary: The Willingham Case, The Way and The Woman on the 6th Floor.

UPDATE: The final numbers for the weekend have come in and Sherwood has even more to brag about. Courageous actually beat out 50/50 for fourth place. Just about every film came in lower than their estimates. Figures have been corrected in the top ten (below) to match final numbers, while the figures in the text (above) reflect the initial estimates.

Joseph Gordon-Levitt and Seth Rogen‘s 50/50 opened in fourth place, banking $9.8 million with their cancer tale. Some critics are blaming the advertising and dark subject matter for the weak opening, which means word of mouth may help the numbers this week.