The real cause of Jeff Conaway’s May death was revealed this weekend. Did his drug abuse lead to his demise? 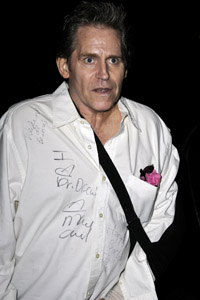 The sad final chapter of Grease actor Jeff Conaway’s life was finalized late last week when authorities released the cause of his May death.

Los Angeles County coroner Craig Harvey revealed that Conaways’ death was accidental and caused by major infections, including pneumonia. Harvey did reveal that opiates were in the Taxi actor’s system when he entered the hospital on May 10, but they didn’t do a toxicology test as part of the investigation.

Conaway — best known as John Travolta’s best bud Kenicke in Grease — battled with drugs and alcohol over the years. He spent numerous stints in rehab, including multiple sessions with Dr. Drew on Celebrity Rehab.

The actor made his last public appearance on April 29 at the Anaheim World Wizard Comic Con where he reminisced about Grease and talked about his new projects, including a film he said would help him earn an Oscar.

He appeared at the convention with his fiancé, Vicki Lizzi, even though a month earlier he accused her of injecting him with painkillers and orchestrating a police bust.

“I think what happened is that she called up and said, ‘You can find him passed out with cocaine all over the room. If you want to go bust a star, then here’s your chance.’ That’s what I think happened,” Conaway told RadarOnline in March.

“I can’t help laughing because it’s funny to me and that’s what this thing is all about, is the fact that he’s on so many pain meds that it’s affecting his mental state, all these things that he’s making up,” Lizzi told the website.

Were you surprised to learn what really caused Jeff Conaway’s death?

Read on for more Jeff Conaway