Jacqueline Laurita is lashing out against RHONJ co-star Teresa Giudice on Twitter. Find out if Teresa Giudice is innocent or creating drama for the show. 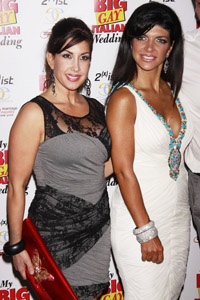 What happens when you mix the Real Housewives of New Jersey and Twitter? An online catfight, that’s what.

RHONJ stars Jacqueline Laurita and Teresa Giudice went at it this weekend on the social media website after Laurita said the Fabulicious author was the person who told the press that co-star (and Giudice’s sister-in-law) Melissa Gorga used to be a stripper.

What’s worse? Laurita said Giudice tried to comfort Gorga at a recent fashion show, even though she was the one who allegedly started the rumor in the first place.

“Teresa told me that ‘rumor’ about Melissa when she first started the show,” Laurita tweeted on Saturday. “She wanted her out then. She plotted it. She played dumb on camera and even defended Melissa.”

Gorga never was a stripper, according to her former boss. “She was a bartender for a couple of months years ago, it was such a short time,” Lookers Gentlemen’s Club owner Larry Guarino told US Weekly.

Giudice hasn’t publicly addressed her co-star’s accusations on Twitter, save for a couple of tweets last week.

“You know Bravo loves it when bloggers make up crazy stories to get people excited about the show. Aren’t we exciting enough w/o the lies?” she tweeted on Thursday. “Remember when I was supposedly punched in the face? Now supposedly Jacq slapped me. And I hired a male stripper to expose Melissa… LMAO”

“Sorry, it’s NOT true. But you’ll all have to turn[sic] in to Season 4 of RHONJ to see what really happens (the truth is actually way scarier…)” she teased cryptically.

Laurita does agree with Giudice on one thing: More juicy details will be coming out soon.

“There is even a lot more to the story that will eventually come out. She’s no good and yes…she has stabbed me in the back plenty of times,” Laurita sniped of Giudice. “I’m not so forgiving anymore.”

“Teresa is scum!” she added.

Who do you believe in this Real Housewives of New Jersey feud: Teresa Giudice or Jacqueline Laurita?

Read on for more RHONJ