Travis Barker changed his life for the better after a 2008 plane crash nearly claimed his life. 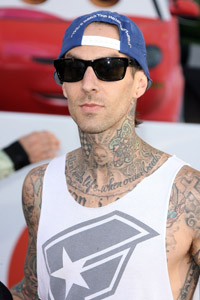 It’s been three years since a plane crash that nearly took the lives of Blink-182 drummer Travis Barker and Adam ‘DJ AM’ Goldstein. Their lives took drastically different paths after the accident: DJ AM relapsed into his drug addiction and died in August 2009; Barker found a renewed love for life.

Barker, 35, reveals all in a new Blink-182 interview in Rolling Stone magazine. Among the changes? He’s exercising daily and adheres to a strict diet.

“I’ve been vegan since I got out of the hospital … It’s another eye opener. It changed my life in a number of ways,” he told the magazine.

“I mean, I run every day now,” he added. “I never ran before. In the hospital, I promised myself that [if] I ever walked again, that I would eat well and swim every day. Before the plane crash, I was battling a painkiller addiction. For years.”

Both Barker and Goldstein suffered serious injuries in the crash, including debilitating burns. “I looked Death right in the face,” he said of the crash that killed the pilots and friends with them on the flight.

The accident helped him get back in touch with his Blink-182 bandmates, Mark Hoppus and Tom DeLonge. Their new album, Neighborhoods, is the band’s first in over eight years.

“I’m sitting on a bed and the doctors are talking about possibly amputating my foot. I’m reading this letter from Tom and there’s a picture of his kids,” he recalled of the letter that helped them reconnect. “It was heavy,” he said. “I wanted to reach out to him.”

The only thing he still cannot bring himself to do is fly.

“Unfortunately I can’t do as much touring as I would like because I don’t fly,” he said. “It’s an obstacle. I’m working on it though. I’m trying to get hypnotized, trying to talk to a doctor who retrains your brain. Maybe he’ll help me fly again one day.”

Are you excited for the new music from Blink-182?