Actor Jason Biggs’ wife is revealing a whole lot about their sex life. Read on to find out the juicy details and what he thinks about the whole revelation.

Most celebrities want to keep their private lives private. Not American Reunion actor Jason Biggs — his wife, actress Jenny Mollen, wrote all about their escapades with a Las Vegas prostitute for a new post on Playboy site The Smoking Jacket. 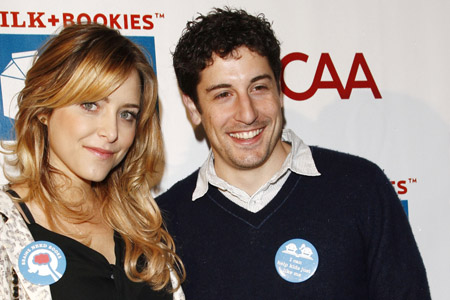 “So my husband and I got a [prostitute],” Mollen wrote in the piece. “I’m hoping, unless you’re some sick depraved dissolute of a person, this isn’t the kind of thing you hear everyday. If it is, [expletive] you, I thought it was pretty gangster. So, ok, where do I begin? I wanted to do something special for his birthday, isn’t that how all these stories start?”

Jason Biggs is getting paid how much for American Reunion?>>

The one-time Angel actress said the quest started by following a friend’s suggestion. “About thirty minutes in, I started to realize something was wrong. This girl wasn’t a prostitute!!” she wrote. The professional was actually a professional massage therapist.

She wasn’t deterred. She continued her quest to find her hubby a special friend, though an uncooperative ATM thwarted those plans.

Mollen wasn’t giving up, though.

“I was able to convince my husband to stay another night by promising we could spend the next day lounging by the pool and sipping mai tais,” she wrote. “My ulterior motive of course being, ‘operation: finish what I started.’ “

“I told him that in exchange we were calling his host friend who works in the casinos and having him send us the most professional call girl he knows. He obliged and within thirty minutes our phone was bombed with photos of the ‘merchandise.’ Aside from feeling like a dirty old man, I felt accomplished. ‘Finally, a professional’ I declared.”

Eventually, the couple paid $600 for a private escort. However, Biggs wasn’t really that into it.

“I was instantly more aroused by my husband. He seemed so mysterious to me,” she remembered. “Something was rekindled between us. Or perhaps something blossomed that was never there before. I don’t know which it was, but I felt closer.”

Think Biggs is embarrassed by his wife’s true confession? Nope.

“My wife is in Playboy. Hot,” he tweeted.

Would you let your significant other dish on your sex life to the whole world?