Andy Rooney made his final appearance on 60 Minutes Sunday night. 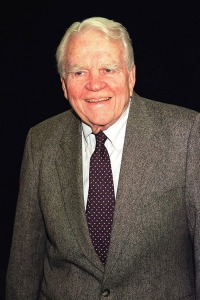 After more than six decades, Andy Rooney said goodbye to his 60 Minutes audience on Sunday night.

“This is a moment I have dreaded,” Rooney said in his final essay on the news show.

“I wish I could do this forever. But I can’t,” he said. “But I’m not retiring. Writers don’t retire, and I’ll always be a writer.”

“A writer’s job is to tell the truth,” he said. “I know I’ve been terribly wrong sometimes, but I think I’ve been right more than I’ve been wrong.”

The 92-year-old award-winning commentator began his career writing for the military’s Stars and Stripes newspaper in 1942 and has been with CBS since 1949, first as a writer for Arthur Godfrey’s Talent Scouts, winding up on 60 Minutes in 1978.

His run has not been without controversy. In 1990 he was suspended without pay for three months after saying on air that homosexual sex, among other things, causes premature death. 60 Minutes lost 20 percent of its audience within four weeks, and he was quickly reinstated. In 1994, his harsh comments about the suicide of Kurt Cobain caused mental health experts and sufferers of depression to flood the network with complaints, some of which Rooney read on the air with no defensive comments.

Calling his longtime colleague “America’s favorite grouch-in-chief,” 60 Minutes host Morley Safer said of Rooney affectionately, “There have been many curmudgeons on television over its long history. None has been so long serving in that role as Mr. Rooney.”

A final fun fact: That lovely wood table Rooney has sat behind for all these years? He made it himself.