Add another country to the list that wants no part of Russell Brand. The British comedian was denied entry to Canada this weekend, forcing Brand to cancel a show for 5,000 paying ticket holders. 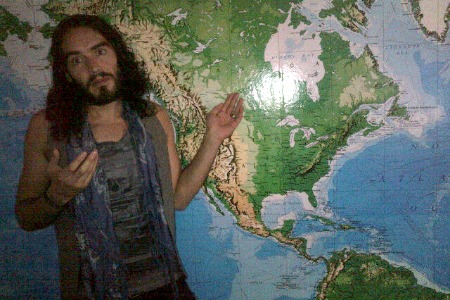 The denial from Canadian customs came at the last minute, as Brand’s chartered jet was attempting to land at the local airport.

“HELP! I’m gonna be late for Casino Rama show unless someone can force Canadian customs officials to let us land in Orillia,” he wrote on Twitter.

“How do you manipulate customs officials? Wasn’t Hitler’s father a customs officer? I’m pretty sure he was,” he wrote, in a move that probably did not ingratiate the agents any more.

“Let me in! I must perform at Casino Rama, Orillia tonight at 9 for 5000 Canadians!”

Brand even posted a photo of himself in front of a map of Canada in a pleading pose — but it was all to no avail.

“I’m sorry. I can’t enter Canada,” Brand wrote shortly afterward. “We must abolish the borders between our nations AND our minds.”

But wait! Was it all a prank? A spokeswoman for the venue where Brand was due to play says the comedian never left LA.

“I think he’s trying to be witty about the whole thing, but it really was just a plane issue, it wasn’t a customs issue at all,” said Casino Rama spokesperson Jenna Hunter.

The venue’s Twitter account said, “Ok all, let’s be clear, @rustyrockets is still in Cali, he never left, he has no immigration or border issue, it was a tech issue with plane!”

Brand was deported from Japan earlier this year because of his criminal record. He has been arrested 12 times, including his most recent run-in with police after being accused of battery by a photographer who got a little too close to his lady.

He was denied entry to the United States in 2008 for an appearance on The Late Show with David Letterman for similar reasons, although he seems to have cleared that up.

A recovering drug addict and alcoholic, Brand has been sober since 2002. He wed Katy Perry in October 2010.