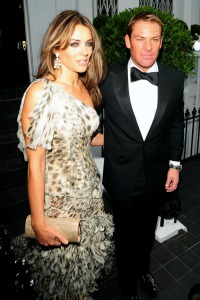 Warne proposed on Friday night at the Old Course Hotel in St. Andrews — the same town where Prince William and Kate Middleton met at university — and presented Hurley with a humongous sapphire and diamond ring thought to be worth nearly $80,000.

“Thanks for all your congratulations,” Hurley wrote on Twitter Saturday.

Then on Sunday, she followed up with, “Thanks again for all your lovely messages. Means a lot to us x.”

The romance between Hurley and Warne was made public in a shocking way last December, when the pair was spotted out and about together and exchanged cheeky messages on Twitter — while the world thought both were still happily married to their respective spouses.

Hurley quickly announced that she and textiles heir Arun Nayar had been separated for several months before the photos and video of her kissing Warne hit the media. The former athlete made a similar announcement about the status of his own marriage.

Hurley finalized her divorce from Nayar in June. The happy couple will be creating a big extended family: Hurley’s son by multimillionaire Stephen Bing will be joined by Warne’s three children from his previous marriage to Simone Callahan.