The plot thickens on Revenge as Emily Thorne sets her sights on another target.

Emily Thorne (Emily VanCamp) is just beginning her plot to take down the ones who wronged her father — and it keeps getting better. 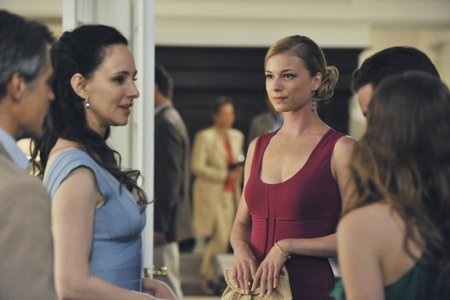 On last week’s episode of Revenge, Emily took down a hedge fund suit who she considered an uncle as a child and was one of her father’s friends. She also continued her mission to get closer to Daniel Grayson.

Check out what SheKnows thought of the Revenge pilot>>

This week on “Betrayal,” her revenge continues as she zeros in on the man who convicted her father — watch out District Attorney, she’s coming for you!

The official synopsis describes “Betrayal” as the following: “With unexpected assistance from her new ally, Nolan, Emily makes it her mission to destroy the political and professional life of the District Attorney who convicted her father. Victoria very privately grieves the loss of her only true love while plotting to confirm her suspicions about Emily’s past. Meanwhile, Daniel exposes a side of himself that Emily finds impossible to resist.”

Revenge’s fresh and calculating twists have been keeping the viewers interested. We want to hear from you. Sound off in the comments section and tell us what you think of Revenge — is it sweet or sinking?