Are you ready to see where Mike Chang (Harry Shum Jr.) gets his dance skills from? Well, we’re pretty sure it’s not going to be from the scholastic-driven parents being introduced on tonight’s (Oct. 4) Glee — so we’ll have to keep wondering. 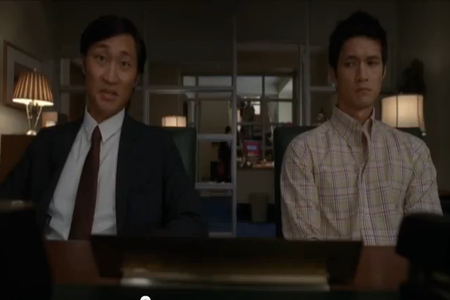 On this week’s episode of Glee, “Asian F,” it’s all about the parents. Here’s what’s going down this week: “Emma’s parents (Valerie Mahaffey and Don Most) visit and get an understanding of her problems. Meanwhile, Mike Chang’s parents (Keong Sim and Tamlyn Tomita) step in to help their son confront his biggest problem, which is bad grades in school.”

Last week, “I Am Unicorn” set up a nice path from some great character development by putting Blaine (Darren Criss) and Kurt (Chris Colfer) in the awkward situation of both being considered for the lead in the school musical.

We also got to see the dark side of Glee, with Quinn’s (Dianna Agron) fake attitude adjustment. How they progress the story of baby Beth is going to leave room for the great depth that Ryan Murphy promised us at the start of the season.

What do you think of season three of Glee so far? Are they leaving the hiccups of season two behind or is it still a watered down version of how Glee began?

Tell us in the comments section what you think.