On October 1, Gene Simmons married longtime girlfriend Shannon Tweed in front of 400 guests in Beverly Hills. After 28 years together, the two united in holy matrimony with their family and closest friends in attendance.

It was the cliffhanger to end all series cliffhangers when Gene Simmons dropped to one knee and proposed to longtime love and mother of his two grown children, Shannon Tweed, on the finale episode of Gene Simmons Family Jewels. After a year where things looked rocky for the duo and speculation was they wouldn’t make it as a twosome, Simmons realized he couldn’t live without Tweed and made his feelings official during a romantic vacation in Belize. 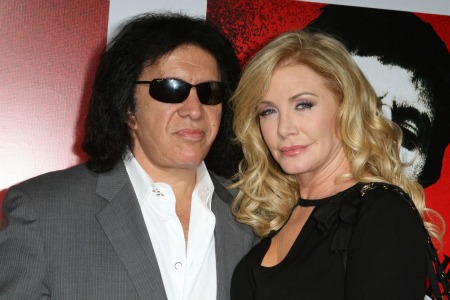 After Simmons proclaimed, “You’re the only friend I’ve got, you’re the only one I love and the only one I will ever love,” viewers were left with a cliffhanger of an answer. Well the answer came on October 1 when Tweed, Simmons, their children Sophie and Nick and 400 family and friends gathered at the Beverly Hills Hotel to watch the two exchange their vows.

After 28 years together, the KISS bassist, 62, and his lover, actress Tweed, 54, were united in their feelings for one another outside on the crystal lawn at the famed hotel. Their children, Nick and Sophie, were the best man and maid of honor respectively. KISS’ Manager Doc McGhee and bandmate Paul Stanley were also in the wedding party.

Tweed walked down the aisle in an ivory Priscilla of Boston gown and carried a bouquet of ivory garden roses. She later changed twice during the evening.

According to the couple’s representative, the guests cheered when Simmons said “I do” to Tweed. The duo exchanged sentimental and heartfelt vows they wrote themselves.

Their first dance was to Etta James’ At Last, performed by their daughter Sophie.

During the lively reception, every member of the family took the microphone to entertain the crowd. Nick wowed the crowd with his rendition of the Doors song, Roadhouse Blues, accompanied by Paul Stanley’s son Evan on guitar.

In the wee hours, it was the members of KISS who, in full wedding attire, hit the stage and performed their hits Lick It Up, Shout it Out Loud and Rock and Roll All Nite.