Hilarious Saturday Night Live star Kenan Thompson is reportedly set to walk down the aisle. His planned wedding date is even a funny choice. 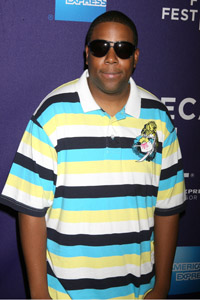 Hilarious Saturday Night Live main player Kenan Thompson is reportedly engaged! The comedian will tie the knot with model Christina Evangeline on Nov. 11: 11/11/11, according to US Weekly.

The actor — who first rose to fame as one half of the Nickelodeon duo Kenan and Kel — hasn’t spoke out about the engagement, though Evangeline has sort of confirmed it on Twitter.

“[W]e are. just don’t know how people are finding out. especially the date. wow lol,” the model wrote on her twitter account under the user name Creole_Bonita. She also retweeted an US Weekly article about their engagement, so either she’s confirming it or just playing with fans.

“[H]e’s my best friend. I could only be so lucky,” she wrote in another tweet.

Thompson hinted at his love last during an interview with Wendy Williams in 2010.

“She’s a pretty girl,” he told Williams. She then asked the obviously smitten comedian if he thought about popping the question.

“I do want to marry her, is that strange to say?” he asked Williams while the audience let out awwws.

“There is no better motto for the federal government than that of a pizza place,” said Thompson as Cain. “It’s 4 o’clock in the morning and you’re high as a kite and the stuff in your fridge is weirding you out — if you order it, pizza will come. Pizza will come! Oh, pizza will most definitely come. And if you vote for me, America, I promise you that I will deliver.”

“I think it’s great!” he told Fox News of skit. “I’m going to use that in my next debate: If you vote for me, America, I will deliver.”

Congratuations to the happy couple!