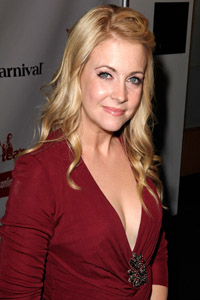 Melissa Joan Hart: racist? That’s what a former employee of the Melissa and Joey actress claims in a lawsuit filed on Thursday in Los Angeles that names Hart and several other business associates as defendants.

In the lawsuit – first obtained by E! News — Shana Kharineh alleges that she was subjected to racial discrimination soon after she was hired as manager of Sweet Harts Sweets in Sherman Oaks, California location in May 2011 for $450 a week.

Kharineh, an African American woman, alleges that she was required to work several hours of overtime without overtime pay or breaks. She also said she was told not to wear black as part of her work uniform because “‘black on black’ did not look appropriate,” according to the document.

The former manager said she was fired in August, but not before her employers “berated and humiliated her” about her personality and relationships with co-workers and laughed that “when she bent over her underwear would show.”

“Melissa Joan Hart is the owner of Sweet Harts Sweets in Sherman Oaks, California. While the shop was her vision, Melissa does not currently function in a day-to-day operational capacity, and has never met Shana Kharineh,” Hart’s publicist, Marla Farrell, told SheKnows Friday night. “Sweet Harts Sweets is an equal opportunity employer, as is Melissa Joan Hart. Neither Sweetharts Sweets nor Melissa engages in or condones any form of discrimination whatsoever. There is no basis whatsoever to these vicious allegations.”

Hart was excited to talk about her new yogurt and candy store when it opened in 2009.

“We are so excited about opening our new sweet shop, Sweet Harts in Sherman Oaks,” the 35-year-old told Women’s Day at the time. “It is adorable and has an old world feel. There will be self-serve frozen yogurt, baked cookies, cupcakes, gelato, coffee, and nostalgic candies — something for everyone.”

The store fits in with the wholesome image Hart has created over the years through her roles on shows like Clarissa Explains It All and Sabrina the Teenage Witch.

“I’m the oldest of eight kids and have always behaved myself because of them, I always wanted them to look up to me,” she told Women’s Day. “When I did the Maxim shoot, I was really proud of it because I was doing something grownup. But when my brother told me it was getting thrown in his face at his high school, I decided I wouldn’t do anything more risqué than that. The industry is different now with so many media outlets, but there are a group of us from my generation who want to do the right thing. We all want to have a real life outside of work with a family and kids.”

Do you think the lawsuit is legitimate, or a play for cash?