The original cast of the 1999 comedy American Pie is returning for a new installment called American Reunion and it won’t be cheap! We’ve got the skinny on who got paid what to bring their character back. 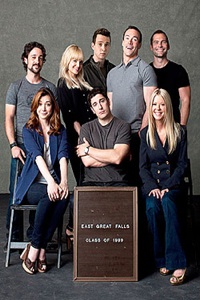 If you were a teen in the late ’90s, American Pie defined your generation. That’s why Universal has no problem writing a check to ensure every actor’s return for American Reunion. Over a decade after the first film’s release, the original cast will reprise their roles for one last sequel.

Have you ever wondered what actors are worth what? The Hollywood Reporter recently revealed the salaries being paid out to the American Reunion stars. The pay ranges from $5 million to $250,000. Universal gave headliner Jason Biggs and Seann William Scott a cool $5 million plus some of the first-dollar theater gross to reprise their roles as Jim and Steve Stifler.

Next in line is How I Met Your Mother star Alyson Hannigan and veteran actor Eugene Levy, who reportedly received $3 million to return as Michelle Flaherty-Levenstein and Jim’s dad. These four characters are fan favorites and played a very important part in the original trilogy.

As for the rest of the gang — Chris Klein, Eddie Kaye Thomas, Thomas Ian Nicholas, Natasha Lyonne, Jennifer Coolidge, Mena Suvari and Shannon Elizabeth are being paid significantly less. The trade’s source claims they received somewhere between $500,000 to $750,000, which is still higher than Tara Reid’s salary. The studio supposedly offered the actress a mere $250,000 for her appearance as former high school beauty Vicky Lathum.

Studios don’t typically confirm actor’s salaries but THR claims to have gotten their info from a trusted source.