Jersey Shore’s Snooki didn’t lose weight by going on a liquid diet (ahem, alcohol diet), or by following a strict diet – so how did she do it? The pint-size reality star tweeted about the diet pills that have helped her shed 17 pounds. 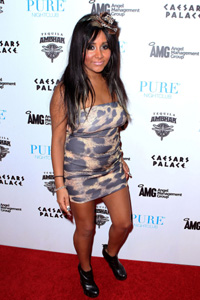 Snooki has reportedly lost 17 pounds while shooting this season’s Jersey Shore – and that’s a lot for her 4-foot-9- inch frame. The reality star said this summer that she was trying to get high school skinny.

“[I want] to get to where I was when I was a cheerleader in high school,” she said. From the looks of her slimmed-down bod, it looks like she accomplished it. So, how did she do it?

She took to twitter to say it is not HCG hormones that have helped her shed the weight, but diet pills.

“Glad to hear reports that say I look good =) but it’s not because of HCG! Thanks @Zantrex!” she tweeted, referring to Zantrex-3 Fat Burner diet pills. The diet pills are amphetamine-free and contain herbs, such as yerba mate, green tea, guarana and caffeine.

She also admitted that Zantrex is paying her to endorse their product. “One of my followers asked if I was a paid spokesperson for Zantrex…yes haven’t you seen the ads in Star?” she tweeted.

Tell us: What do you think of Snooki’s slimmed-down physique?