Amanda Seyfried has a new boyfriend – and the two are already considering adopting…. a dog, that is. 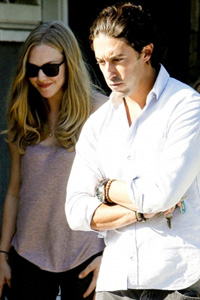 Actress Amanda Seyfried may be getting serious with her new boyfriend, New York real estate exec Andrew Joblon. After dating just one month, the two were spotted yesterday afternoon looking for dogs to adopt in West Hollywood, California.

Seyfried dated her Mama Mia! costar Dominic Cooper for three years before moving on to Ryan Philippe earlier this year. Their relationship fizzled after Philippe’s ex-girlfriend gave birth to a baby she said was his.

The Red Riding Hood actress has put that relationship behind her and sources say that Seyfried, 25, and Joblon have been dating “for about a month.”

“They are calling themselves a new couple,” the insider says.

The couple was spotted at the Eric Trump Foundation’s 5th Annual Gold Invitational & Gala in Westchester, New York this month. They stayed apart during the cocktail reception, but sat next to each other once the dinner started. An observer at the party said “they had great chemistry” and “were great together.”

If Joblon is “the one” remains to be seen, but Seyfried doesn’t seem to be letting past relationships affect her new ones. The actress had opened up about getting her heart broken by Cooper, who was not over his ex-girlfriend. “I was just kind of foolishly thinking that the two of them were done and Dom and I were involved. But we weren’t really as involved as I thought. So I got my heart broken pretty hard,” she told Elle.

Seyfried’s new relationship must have also put her in a giving mood, as she matched Bret Michaels’ $25,000 donation to the foundation at the event.