Move over, Selena Gomez! It sounds like Demi Lovato has found another best friend in Kim Kardashian. 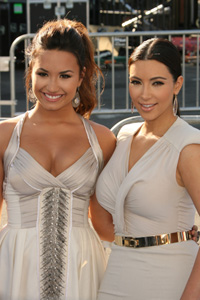 Demi Lovato has been through a lot this past year, including rehab due to eating disorders and cutting issues, and she says her friendships have really helped her get though this difficult time.

It’s a well-known fact that she and Selena Gomez are BFF’s, but she told Billboard that she also counts Kim Kardashian as a close friend.

Kardashian tweeted her support of Lovato’s album, writing, “My lil sis @ddlovato’s album comes out today!!! I just got UNBROKEN! Go out & get it! Its sooo good! So proud of u Dem! Xo”

Lovato’s Unbroken album has done well as her Skyscraper single shot to the top of the charts. “I took a long time on this album, and I’ve been on such a journey over the past year that it just feels awesome to be able to release music that I’ve worked really hard on, and now that it’s done well [on the chart] it feels even better,” she says.