Crystal Harris doesn’t have a need for Hugh Hefner’s engagement ring anymore, so she’s cashing it out next month at auction. 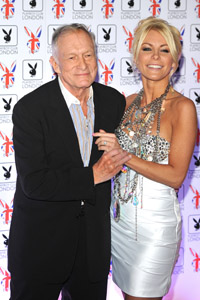 Crystal Harris is giving up the last remnant of her relationship with ex-fiance Hugh Hefner: She’s auctioning off her engagement ring!

The former Playboy bunny is set to auction her 3.39 carat circular-cut diamond ring at Christie’s in New York in October. The ring — valued at $90,000 — will likely fetch about $30K at auction.

“[She] couldn’t bear to look at the ring anymore because it brought back bad memories,” a source told TMZ.

Harris broke off her engagement to Hefner in June, right before they were set to wed. “I got cold feet,” Harris told Access Hollywood at the time. “Over time I just realized it wasn’t for me, it was all happening so fast.”

However, many claimed the real reason for the split was her relationship with Dr. Phil’s son, Jordan McGraw. Harris didn’t do a lot to endear herself to Playboy fans after the break-up, though. She went on Howard Stern’s SiriusXM radio show after the break-up and spilled all the details about her non-existent sex life with the sex pioneer.

The blonde bombshell told Stern that Hef only lasted “like two seconds” when they had sex and that she never saw him naked. “Then I was just over it,” she said. “I was like, ‘Ahhh.’ I was over it. I just like, walked away. I’m not turned on by Hef, sorry.”

Harris later apologized for her comments — and now Hefner is telling his side of the story, claiming that he and Harris “had sex once a week.”

“We had sex with her and a girlfriend,” Hefner told The Hollywood Reporter of his sex life with Harris. “We had sex the first night that we met with another girl, and it was such a nice relationship that I kept them both over for a weekend.”

Hefner rebounded with another Playmate, Shera Berchard, and is still looking for the ever-elusive soul mate, even at 84.

“I’m looking for a partner,” he said. “A romantic partner.”

Do you think Crystal Harris should sell Hugh Hefner’s engagement ring, or give it back?