Arnold Schwarzenegger has five children (including his love child), but he must feel that still isn’t enough of the Terminator to go around. The former governor of California has ordered seven bronze statues of himself. 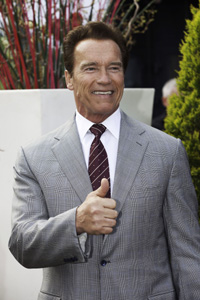 Arnold Schwarzenegger has ordered as many as seven 8-foot, 580-pound bronze statues of himself, with each statue costing around $100,000. The Terminator star’s statues will show him in his prime Mr. Olympia body building days, when he won six straight titles from 1970-1975 and again in 1980.

The bronze statue will show him flexing in a bodybuilder pose – and the castings have reportedly been made to “heroic” scale to make him look larger than life.

What does Schwarzenegger plan on doing with these bronze statues? The owner of Oregon-based TW Bronze, Tim Parks, says that one was shipped this month to Austria, where his childhood home has been made into a museum. The second one could be going to Columbus, Ohio where the Arnold Fitness Weekend is held. He also wants “one for himself,” of course, reports the NY Daily News.

No word where the remaining statues will be going – but we have a feeling Maria Shriver won’t be first in line to get one.

Parks said that the bronze statues are actually based off of a 22-inch sculpture by Ralph Crawford. He said Schwarzenegger was very pleased with the end result, telling him that it was “fantastic.” He apparently didn’t think the statue was quite tan enough, however, because he did ask for them to darken the patina or exterior of the statue.

Why did he want seven statues made? Parks said he told Schwarzenegger the number of statues “ought to be your number,” referring to his seven Mr. Olympia titles.

Tell us: What do you think of Schwarzenegger’s statues? Cool or creepy?