Stacey Dash is back on the market, fellas! The former star of Single Ladies officially divorced her husband this week after she claimed he abused her throughout their short marriage. 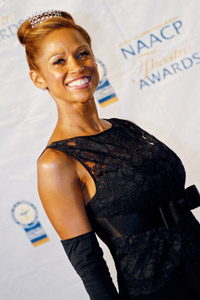 The Clueless actress filed for divorce from Xuereb in January 2010 after she claimed he physically abused her throughout their marriage. Authorities also granted her a restraining order, according to The Hollywood Reporter.

The couple doesn’t have children, though Dash does have two children from previous relationships: son Austin, who was born in 1991 and daughter Lola, born in 2003.

Dash isn’t afraid to be honest when it comes to her past mistakes in love. She admitted that she’s slept with all three of her husbands on the first date.

“Yes, I slept with all my husbands on the first night. And they said, ‘Marry Me’ and I said, ‘yes,'” she told Smooth magazine last year.

The actress went to the 2010 Academy Awards as Jamie Foxx’s date, though at the time she wanted to stay single. However, she was quick to clarify that she never consummated the relationship with him because she wanted to stay a — you guessed it — single lady.

What should Stacey Dash do next in her career and personal life?