Former South African President Nelson Mandela’s granddaughters will be getting their own reality show to air in 2012. The three grew up in the U.S., but returned to Africa for business and family reasons. 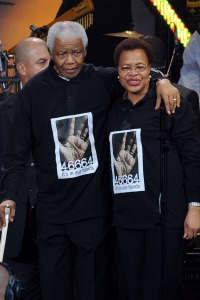 Today, the Mandela family announced that three of Nelson Mandela’s grown grandchildren will be getting their own reality show, slated to air sometime in 2012.

Dorothy, Zaziwe and Swati will be the stars of the yet unnamed television show.

It will focus on Dorothy Adjoa Amuah, Zaziwe Dlamini-Manaway and Swati Dlamini’s search for their true selves.

Show Director Graeme Swanepoel explains, “This is about three women breaking away from the Mandela legacy to find their own feet.”

Swati, the granddaughter of Winnie Madikizela-Mandela revealed at a news conference, “The show will be about our lives as young, black women. We’re not wearing, ‘I’m a Mandela’ t-shirts. “We’re definitely not the African Kardashians.”

Producer Rick Leed (Home Improvement and Dr. 90210) revealed at a press conference in Africa,”It’s not going to detract from the dignity of Nelson Mandela.”

He continued, “Their aim is to showcase the new Africa and give viewers a peek into its sophistication and it’s exciting potential.”

“These girls may have grown up abroad (U.S.) but they have all chosen to come home to South Africa and bring the best that they have gathered in their international experience and studies. They feel they can make a positive contribution to the continent.”

Reportedly, the show will not feature the girls’ parents or grandparents at any time.

Dlamini-Manaway has a 10-year-old son, a 2 year-old daughter and another child due next year. She is involved in a family business, Mandela Dlamini Associates.

Dlamini is a single mother who plans to set up a foundation to aid the people in her country in housing, education and medical needs.

Amuah has a law degree and works in the luxury brands business.