As if there weren’t enough reasons to see the Kardashian family on television, all next week on the Today Show every day will have yet another Kardashian sibling or parent taking the seat next to Hoda Kotb. 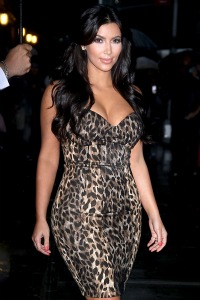 While fourth-hour Today Show co-host Kathie Lee Gifford is working on a new stage play, Hoda Kotb has recently dealt with a revolving chair of co-hosts until Gifford’s return.

Next week, at least all her hosts will be from the same family, as the Kardashian clan, Kim, Kortney, Khloe, Kris and Bruce take their turns in the Today Show hot seat.

Known as the hour where the wine flows freely, mild-mannered Kotb will have her hands full with the outspoken first family of reality television.

On Monday, Khloe will occupy the chair followed by Bruce, Kris, Kourtney and Kim on Friday. Kim will take her hour to plug her upcoming E! Television Special, Kim’s Fairytale Wedding, airing on October 9 and 10 on the channel.

According to the website deadline.com, the appearances were engineered as a cross-channel promotion between E! and NBC Universal after the merger between the network and Comcast, which owns the channel. Speculation still abounds about the family getting their own series on broadcast television, specifically NBC.

In other Kardashian news, according to cinemablend.com, the Kardashian sisters recently gave an interview where they admitted to looking like drag queens!

According to Kardashian family lore, the girls’ father, the late Robert Kardashian, saw his teenagers wearing too much makeup and instead of discouraging them, hired a makeup artist to teach them to do it properly. Said Kim to Jane Magazine‘s website, “We’ve turned out to be the biggest trannies because of it.”

Replied Khloe to Kim’s statement, “We joke and we say we are like trannies because we love hair and makeup. I don’t think we necessarily need it, but we love it.” She then commented on sister Kim stating, “Kim, definitely, if you take off what’s on her face, her face is exactly the same. She doesn’t need it, its just a mind thing to her. She really doesn’t need any of that on her face.”