Ashton Kutcher tweeted a reply to wife Demi Moore’s incessant philosophical quotes about what may or may not be problems in their relationship. His response was quite surprising.

Ashton Kutcher, star of Two and a Half Men, at last responded to wife Demi Moore‘s tweets about issues that may be in their relationship. Although roundabout in response, Kutcher made his feelings known, of course, in 140 characters or less. 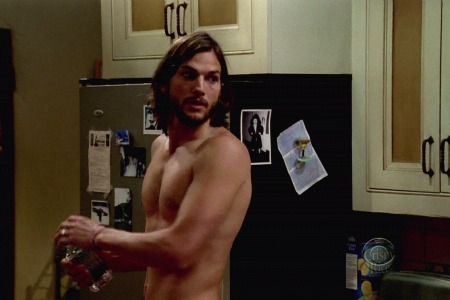 Thursday, Kutcher finally responded by tweeting the name of and link to a Public Enemy song, Don’t Believe the Hype. It was a not-so-subtle reference to the issues that have fallen into the public consciousness about his marriage to Demi Moore.

More deets on their relationship here>>

Right after his tweet, Kutcher then stated on the social networking site, “When you ASSUME to know that which you know knothing of you make an ASS out of U and ME.”

Whether or not that was directed at Moore’s tweets about the status of their relationship is unclear. But Kutcher, unusually quiet about his personal life, uncharacteristically spilled the beans to about a million followers.

Considering Moore has not tweeted since Wednesday, unusual for the actress, a response will probably be in order.

Are Ashton and Demi legally married? Find out here>>

Also an issue for Kutcher this week, some strategic product placement that went right under CBS’ radar. He creatively placed some stickers on a laptop he was working on in a scene of the show that were for media websites he has a financial interest in.

States a representative for CBS to E! News, “This was not part of any advertising transaction with CBS. Our policy is to disclose such financial interest in a credit at the end of the broadcast.”