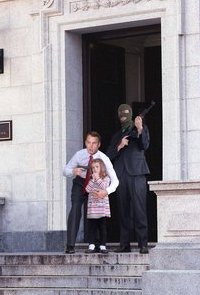 Just to be clear, no, there aren’t 12 children being held hostage by group of armed congressmen inside the Capitol building in Washington, D.C., despite what the Onion has been saying today on Twitter and Facebook.

It’s just another news spoof courtesy of the Onion, the fake news organization. But this time, the spoofing is a little too close to reality for some, including the United States Capitol Police who told SheKnows.com that they were investigating the origin of the posts.

The latest Onion fake news flash, around 4 p.m. EST, had President Obama in a bullet proof vest on the Capitol steps trying to convince the congressmen into releasing the 12 children. The running satire began about 10:30 a.m. EST with the tweet: “BREAKING: Witnesses reporting screams and gunfire heard inside Capitol building. Stay tuned for more details.”

That was followed by: “BREAKING: Capitol building being evacuated. 12 children held hostage by group of armed congressmen.” About an hour later, a doctored photo of House Speaker John A. Boehner, an Ohio Republican, holding a gun to a girl’s head was posted.

Some in Onionland were not amused.

“The gag itself was tasteless;comedy/satire, to be sure, but not up to Onion potential,” posted a fan on the Onion‘s Facebook page. “And of course, the buzz helps business. You can’t buy that kind of publicity. You may, however, have to pay for it.”

Most Onion fans applauded, however.

“One of the most creative things from media in a while great publicity too…great job guys. Long live The Onion!” posted another fan.

The hostage spoof comes on the heels of the real arrest of a Massachusetts man in connection with a plot to blow up the United States Capitol and the Pentagon. A Capitol Police spokeswoman cited to SheKnows.com initial confusion from the “many retweets, reports from different places, etc.” of the Onion spoof that led the department to issue a press release stating that there was no hostage situation.

Image courtesy of The Onion/Facebook